The significant increase in recycling rates, to which the German Packaging Act (VerpackG) requires dual systems to adhere, is accompanied by a major investment mandate for the systems. For example, the planned quotas for plastics from 36 percent to 58.5 percent and in a second step to 63 percent from 2022 can only be achieved if the sorting systems are technically upgraded. This applies both to the quantitative sorting capacity and the qualitative sorting potential. A similar picture is emerging for paper-based packaging: Here, the quota initially rose from 70 to 85 percent, and from 2022, 90 percent is the benchmark to be met.

This ongoing investment and modernisation requirement is met by a lack of revenue: Although more and more expensive material is being generated, according to the Central Packaging Register, free riders have ensured that the licence income on the basis of which the disposal and recycling process is organised by the dual systems does not increase to the same extent. This applies in particular to packaging made of paper, cardboard and paperboard, which is generated to a greater extent by online trading in particular, but is not licensed in corresponding quantities. At the same time, revenues for the recycled materials that the dual systems obtain from recycling are collapsing.

Last but not least, the freedom introduced by the Packaging Act for local authorities to demand co-use of the collection systems for paper-based packaging by the dual systems generates further costs for the dual systems. However, this is done at costs and under conditions that are determined by the municipalities alone, while the dual systems have no say. As a result, many local authorities now charge fees for the collection of paper waste on a volume basis rather than on a weight basis – which leads to a considerable increase in costs, especially for bulky packaging, as is often the case with cardboard and paperboard.

The dual systems must now position themselves in this situation and find a way to continue to act economically in order to efficiently promote the recycling economy and at the same time to offer fair pricing to customers who comply with the requirements of the German Packaging Act (VerpackG). 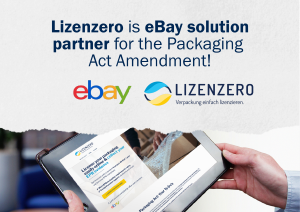 From now on, we are available to all eBay merchants as a preferred partner of Germany's largest marketplace for questions about the Packaging Act amendment. What does that mean exactly?